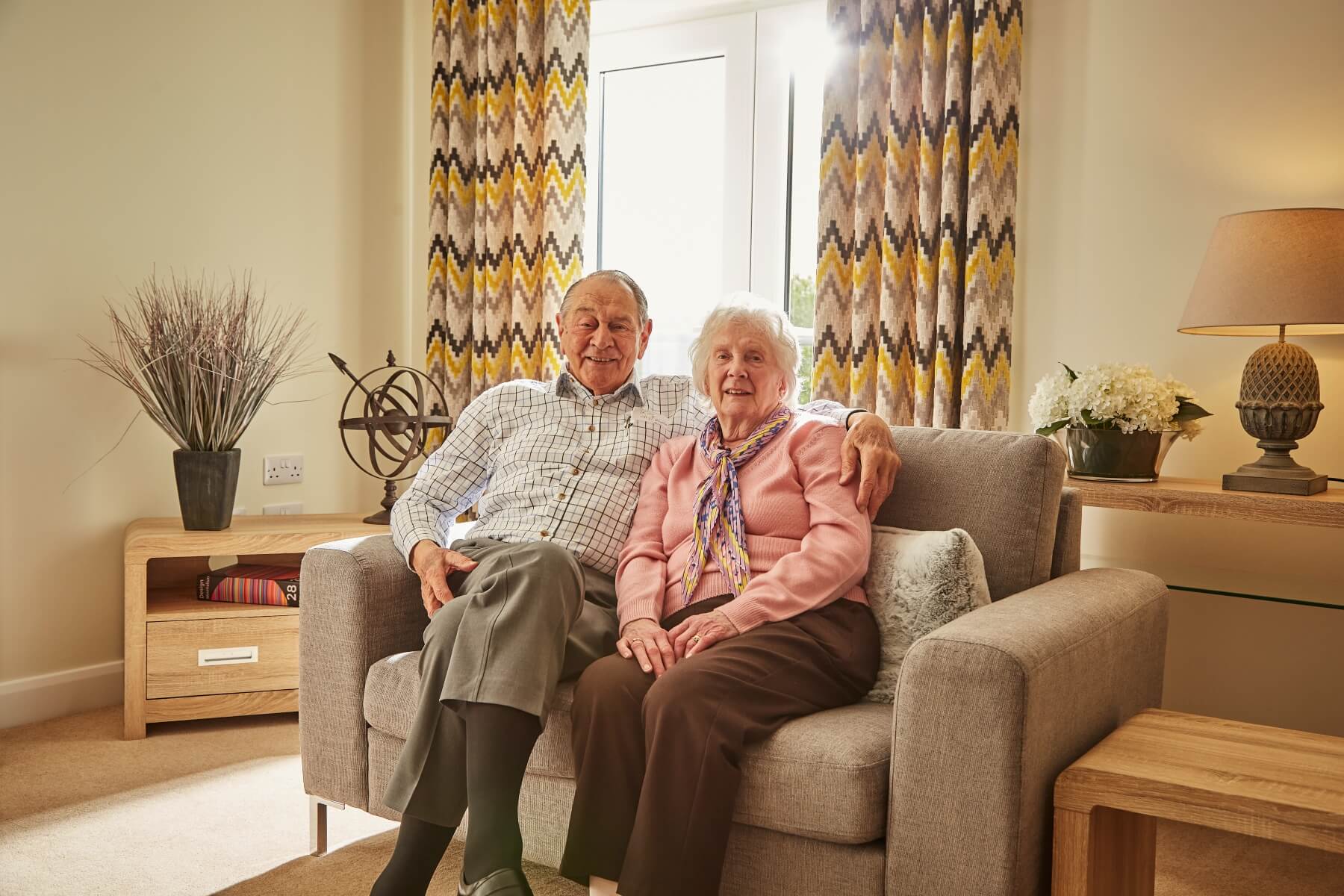 Philip and Edna’s daughters were worried about their parents and wanted to make sure that help would always be on hand if they ever need it.

Philip and Edna have known each other for 76 years. They were 10 years old when they first met.

“My father was a lay preacher and he used to give sermons around Lancashire and Cheshire,” Philip explained. “One day when I was 10 years old, my mother couldn’t go with him, so he took me along instead and that’s when I first met Edna.”

When they were 19, Philip and Edna began dating after they bumped into each other at an event. Edna worked as a secretary then a personal assistant and Philip worked in banking.

“I was 16 when I started work and by the time I retired, I was running the London Northwest region of a major UK bank. I took a banking degree at night school, attending four nights a week to do five subjects, in part one and then four subjects in part two.”

By the time he retired aged 58, Philip had enjoyed flying on Concorde and being helicoptered to business meetings.

When Philip and Edna married, they bought their first house together in Marple and stayed for five years.

“Our next house was in Bramhall, Stockport, where our two daughters were born, Mary in 1964 and Rachel in 1969, and then we moved to Chester.”

In 1972, Philip was asked to work in London, so the family moved to their home in Harpenden.

“This was the time when gazumping was a nightmare, so we bought off plan. It was a detached house with four bedrooms and we extended it. We moved there on 4th of July in 1973 – that was our independence day! We were there until we moved to The Sailings in November 2021.”

“We spent a lot of time gardening and we planted conifers all around the bottom of the garden. We had a wonderful apple tree that produced so much fruit every year. We would make apple sauce and apple pies.”

Philip and Edna had always done the decorating in the house themselves too. Philip was the wallpaper hanger and Edna was the painter.

Edna said: “We were a really good team. But the whole idea of keeping the place to the standard that we’ve always kept it was becoming too much.”

“We decided we had to move. Living where we were was starting to become dangerous. I had a fall on the stairs and our girls were worrying about us,” Philip explained. “Our younger daughter, Rachel, lives up in Scotland near Oban, and she manages a holiday park on the side of the loch. Mary lives near Chelmsford in Essex and runs her own mortgage business.”

Rachel and Mary both felt that the family home had become a bit much for their parents. Rachel said: “The stairs were quite steep and Mum was getting frail on her feet. It was a constant worry that if something happened to one of them, that they would be there by themselves. I know they had neighbours and things around but it’s not the same.”

Mary added: “In the lockdown, they didn’t really see anyone, and I think especially Mum became quite isolated. Dad was still going out because they were very involved with the Church and he would go and check the Church Hall. I was doing their online shopping which meant that they weren’t going out very much. They both enjoy socialising and so Mum was really missing out on going into town and bumping into people.”

In June 2021 Edna, Philip, Mary and her husband Simon, stayed in a lodge at the holiday park which Rachel manages near Oban, and the girls said they wanted to talk to them about downsizing and moving.

Rachel explained: “We’d tried to broach it before. So, this time we said ‘you’ve got to make a decision and it’s got to happen this year. Mum’s health is failing, she’s getting a bit more frail.”

Philip and Edna hadn’t thought seriously about moving until that conversation. Philip said: “We had always been fairly active – we both learned to ski in our late forties. However, more recently we’d started to get some mobility problems. When our children said how worried they’d been, we decided we would move to Southport, which is near to Ormskirk where Edna had lived until we married.”

Edna added: “We wanted to maintain our independence. Southport was halfway between our two daughters; we had lots of connections there and Philip’s brother who had lived in France, had come back to Lancashire. One day Rachel rang us up and said ‘Hey, I’ve found you somewhere in Southport.’ And she went on to tell us all about The Sailings.”

Rachel said: “Dad was a little bit reluctant at first and then he just suddenly said one day ‘you’re never going to guess who I’ve been talking to. I’ve just spoken to a lovely lady at The Sailings and it sounds absolutely marvellous’.”

First impressions of The Sailings

Philip and Edna decided they wanted to go and visit The Sailings and Mary and her husband took them. Mary said: “We went, and they just fell in love with the place. It was light and airy and there was lots of space. It was just lovely.

“The staff and the sales team at Adlington weren’t at all pushy. They were just really pleasant, really nice and everything that they promised, has happened. They’ve carried on showing the sort of care that they did on that first visit.”

Philip added: “We were impressed by the general friendliness of the people that we bumped into. We had breakfast downstairs and we also had lunch. We liked the general ambiance of the lounge.

“The first thing that we liked about our apartment was how much room there was. It was much more spacious than we thought it would be. We chose a three-bedroomed apartment so I can use one of those bedrooms as an office. I’ve not given up everything yet. I’m still helping to sell our old church.”

Rachel added: “I liked the restaurant, the gardens, the fact that the apartment had a balcony so they could sit outside and have some pot plants, the location, the fact that it was brand new so it didn’t need any decorating. It was just ideal. “It also felt safe. There’s somebody on duty 24 hours a day and you’ve got the buzzers that they can wear. It was such a relief for us to know that there’s always somebody there. If Mum and Dad haven’t been down to the restaurant or nobody’s seen them within a 24hour period, they get a phone call to check they’re ok. It’s just such a comfort, knowing that they’re looked out for.”

When it came to moving, Philip and Edna struggled to downsize. Philip said: “Our advice to anybody would be to downsize as much as you can. You don’t need everything you’ve ever had.

Mary and Rachel both said: “Getting Mum and Dad packed up and ready to move really was a team effort. There were several trips down from Scotland and over from Essex and we are grateful that our husbands were a great help and support too. Mum and Dad both became very well-known at the local tip and at all the charity shops! It was tough, but we got there in the end.”

Edna added: “In the days leading up to the move, both our girls were with us to help and on the actual moving out day, we all left the house/shut the door for the last time, together – it was very special.”

Philip has also enjoyed the support provided by the Adlington Retirement Living maintenance team and the handyman at The Sailings: “Since moving in, the maintenance service has been absolutely brilliant. Lee, our handyman, has helped us out a lot. He’s even changed light bulbs for me as Edna forbids me to climb up the ladders now.”

Edna added: “The best thing about moving here has been the peace of mind. Not only for us, but for our two daughters. We hadn’t realised that worrying about us had been affecting their sleep for about 18 months. If one of us falls, there’s help immediately and it’s 24/7. We know all the staff, and they all know us.”

The couple have also been enjoying some of the communal facilities and activities at The Sailings. They both have their hair cut regularly in the hair salon and Edna has started taking part in a weekly chair exercise class.

Edna said: “I really felt it in my muscles the next day. It was good. I’ll definitely go again.”

Philip added: “There’s a coffee morning, a knitting group, film nights, a book club; it’s nice that they’re there if you want to join in with something like that.”

Mary said: “They go for lunch at 12.30 several days each week. Sometimes I call them at 4.30pm or 5pm and Mum’s not back from lunch yet. She’s in the lounge or has met somebody for a chat.”

Philip explained: “We like the fact that here, you are completely independent, but you can enjoy the social aspect when you want to. We’re not joiners of everything. But that’s ideal, having those options.”

Philip and Edna have been particularly impressed by the restaurant at The Sailings. Philip said: “The cooking here suits nearly everybody. Sometimes we have steak and we’ve enjoyed sea bass. All the desserts and the pastries are freshly baked from scratch and if you ask, they’ll make you a cake for a birthday or a special occasion. We had one for our 63rd wedding anniversary in February.”

Philip’s only regret is not moving sooner. He explained: “We probably should have moved 10 years earlier. I was too involved in too many things that deterred us from actually moving. We’re pleased that we’ve made the move and we’re happy here. We would definitely recommend it. In fact, we have done. We told some friends that we were moving here, and they kept ringing up and asking us questions after we moved in. Then, just after Christmas, they called and said: ‘we’ve decided we’re moving into The Sailings’.” 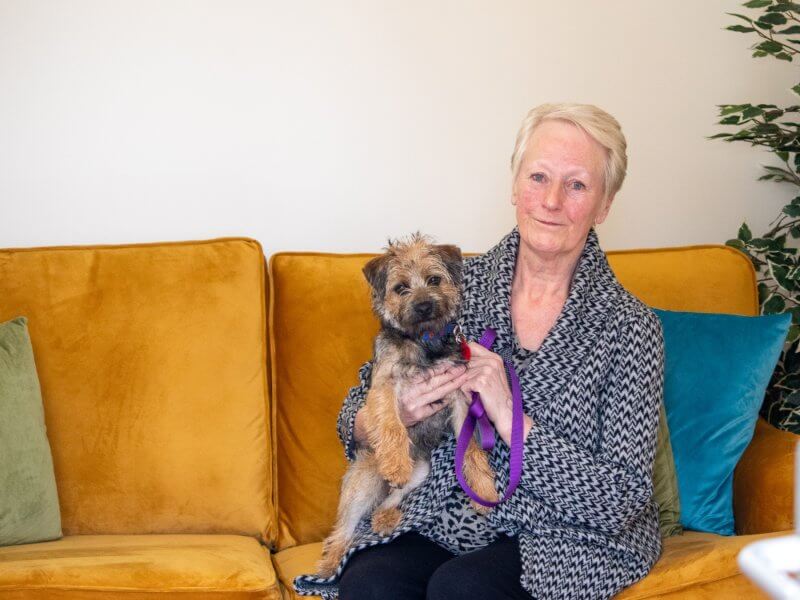 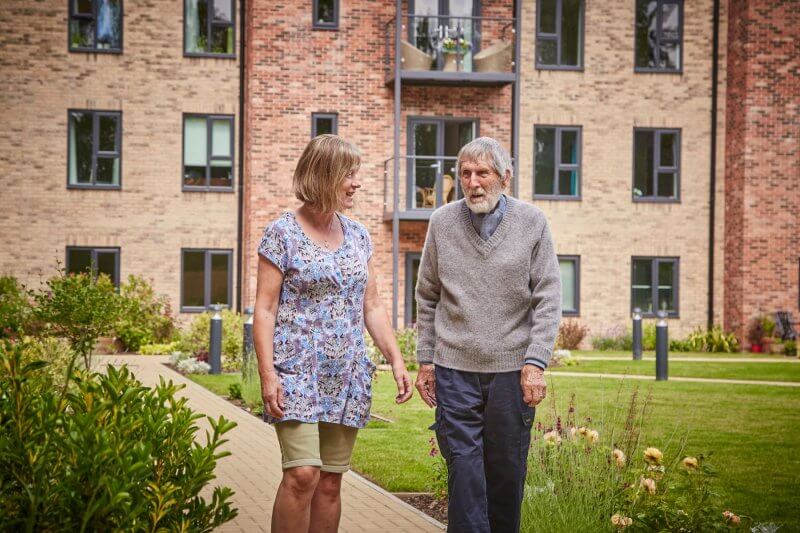