Hannah was ready to move from her four bedroom house in Romiley but still wanted to enjoy living in the heart of the local community.

Originally from Germany, Hannah came to the UK for a one-year visit when she was 20. Her plan at that time, was to return to Germany at the end of the year to attend university. Those plans changed when she met her future husband, Geoffrey, at a friend’s birthday party. They fell in love and Hannah has happily lived here ever since.

Soon to turn 89, Hannah says: “That one year has been going on for quite some time! We had a happy life together and had three children.”

Having been married for two years and with a three month old baby, the couple moved to Romiley in 1955. Geoffrey was a marine engineer and, having raised their three children, Hannah later volunteered as a guide at nearby Lyme Hall for 25 years.

When Geoffrey died 24 years ago, Hannah continued to live in the family home but recently felt that it was time to move.

“Seeing as it had four bedrooms, it was a bit too big for me. I knew I had to make a decision sometime, so when I thought about the possibility of coming to The Folds, carrying on living here in Romiley and still meeting all my friends, well, what could be better!

“I like the big rooms. Normally when you move to an apartment the rooms are fairly small and the size of the rooms here appealed to me. When I came to have a look, I quickly decided what I wanted to do. My children came and had a look too and I moved in at the start of July.

“I enjoy being independent and getting out and about, so it is perfect for me and it’s nicely situated. I don’t need to do any gardening, which is heaven. I also have a balcony with a chair and table on it and when it’s fine and warm, I can sit up there. It’s lovely!

Being at the heart of the local community is important to Hannah and was one of the main reasons that the development appealed to her.

“Romiley has quite a lot of history and it’s not too big to get to know people and to have friends. Once this lockdown situation is over, my friends will be able to come here to visit me. Some of my friends I’ve known since I moved here 65 years ago. I think that shows you the kind of community we have here. People don’t move away unless they have to.” 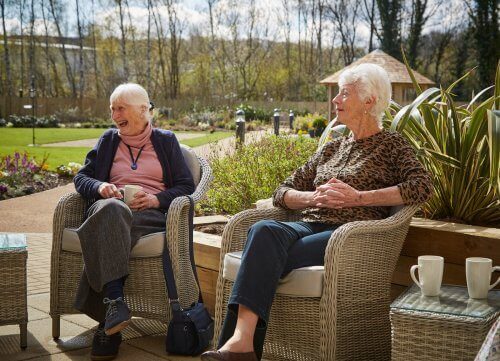